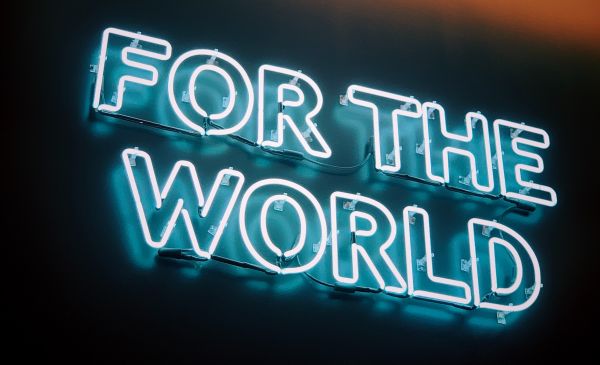 Some companies these days realize that the best opportunity is not to drive people to your website, but to push them toward your mindset.

People are putting their money where their values are. While shoppers might sometimes be on the fence about which new pair of jeans to buy, if those jeans are sustainably designed, have been recycled, up-cycled, or push some portion of profits toward a cause, it makes it easier for shoppers to lean toward purchase.

That phenomenon is not only happening in consumer marketing, it’s also happening in other sectors. The Global Alliance for Banking on Values (GABV), for example, has erected a tent pole for sincerity, honesty and accountability in a category that is repeatedly accountable to charges of greed, corruption and fraud.

“We are a movement of frontrunners,” says Marcos Eguiguren, GABV executive director. “We want to change the way the world looks at banking.”

Rattled by accusations of greed, fraud and outright corruption, banks are being sidestepped by financial giants who aren’t banks at all. PayPal, Apple Pay, Amazon are common examples, but even Brendan Eich (the computer wiz who helped create JavaScript and Mozilla) is in the game, with basic attention tokens (BAT) now being used to monetize the Internet.

“Millennials want to have a Google wallet, they want to use Apple Pay, Venmo and PayPal,” says Sunrise Banks chief brand officer Rebecca Hoeft. “They just don’t care about banks, because they don’t trust us.”

The mix of banking and values has gained street cred because the combination can have measurable side effects when it comes to community well-being. The Brookings Institute recently noted that even in the world’s wealthiest nations, frustrations surrounding income inequality and unhappiness are increasing.

“Trends show that lack of hope, even amidst prosperity, can have high negative costs for societies as a whole,” declare Carol Graham and Sergio Pinto in a recent Brookings article. Companies realize that the tool for resilience and regeneration is a triple bottom line that benefits people, planet and prosperity.

According to a GABV research report, ‘real’ economies deliver “economic resiliency, environmental regeneration and social empowerment for the communities and people they serve.”

“We’re in the business of social change,” declares Sunrise Banks chief executive officer David Reiling, whose company is a member of Global Alliance for Banking on Values. “We just happen to be bankers.”

Founded in 2009 and headquartered in the provincial Netherlands town of Zeist, the Global Alliance for Banking on Values includes 54 banks from around the world. France’s Credit Cooperatif is the largest member, with a balance sheet of over $22 billion.

In the United States and Canada, B-Corp enterprises like Amalgamated Bank, Beneficial Bank, VanCity and Sunrise Banks lead the charge.

“When anyone thinks about banking, they think first about finance,” points out Marcos Eguiguren. “But banks [also] have a responsibility in addressing the other challenges of humankind today.”

Many traditional companies look at social values as a ding that could sacrifice profits. In fact, social vision, values and profit growth do not have to be mutually exclusive. Many new companies create a social vision exactly because they can execute both purpose and profits via social positivity.

“We’ve heard the arguments that a socially responsible company can’t be profitable,” says Amalgamated Bank chief marketing officer, Peter Neiman in New York City. “But the truth is that these types of organizations are now the ones being sought out by investors.”

Neiman points to a Nielsen study that reports “55% of global online consumers across 60 countries say they are willing to pay more for products and services provided by companies that are committed to positive social and environmental impact.”

The most trusted brands all have something in common: they believe in something that governs them beyond profit-making.

As Anne Bahr Thompson writes in her book Do Good, “the most trusted brands give as well as take.”

The Rising Power Of Good

As more individuals understand the impact that large corporations have on the world, they expect those enterprises to use that power for good. The ubiquitous swathe of giving is no longer relegated to TOMS, WarbyParker or holiday charities. Altruism has become a year-round benefactory.

But purpose must be a combine of spine and rigor. Corporations must prove that they are good citizens. Banks applying to the Global Alliance for Banking on Values, for example, survive a rigorous vetting process that is both qualitative and quantitative, and slashes applicants trying to greenwash other intentions.

“We want the highest quality members in terms of values,” stresses director Marcos Eguiguren, calling from Barcelona. “The GABV is the only association of banks where you go through a complete due diligence. We investigate your policies and practices to see if they align with our principles. Being a member of the GABV is really difficult, unlike other organizations. We do not want to be hyper huge. It is not easy to become a member. It’s not enough just to sign up.”

So far, GABV members serve nearly 50 million consumers and have combined assets of over $163 billion and tens of thousands of co-workers.

This might be considered small potatoes when you understand that Citibank has big bank assets of $1.8 trillion. But there are more ways to measure banks beyond asset size, asserts GABV leadership. For example, one meaningful measure might be in terms of how people become better served.

LAPO Microfinance Bank in Nigeria, a GABV member, helps over 4 million clients, 78% of whom are women. BRAC Bank in Bangladesh offers one of the largest online banking service networks in Bangladesh, a country of over 160 million people whose lives are dominated by extreme poverty, illiteracy, disease and typically overlooked by traditional banks.

We are living in a time when people have lost trust in leaders, hierarchies, and institutional rhetoric. Fake news, scripted sound bites, and simultaneous blah surge through the soundpipes to a public that is alternately surprised and stupefied. Authentic inauthenticity has become big business and Big Banks being fined for fraud, corruption and lies has become a social meme.

“As a species, we crave connection,” writes John Doerr in his book Measure What Matters. And what we are connecting to, also matters. When we connect to a value, sometimes that value is not so easily measured.

This is underlined at the GABV annual convention where conference themes are not be about financials, but about subjects like migrants, #MeToo, and melting ice caps.

“It is a metaphor for diversity, financial inclusion and equality,” declares Eguiguren. “In the coming years, banks should become a part of the solution to the challenges facing humankind, rather than being part of a problem.”

The Global Alliance for Banking on Values believes that at the core of human society lies a soul that leans toward good, not evil. The weight of that desire will be discussed as members set out ways not only to improve the financial well-being of the world, but to help determine how they can make the cause for doing good one of the global financial industry’s big bets.

Human values may not be measured by gold or silver assets, but their wealth is a standard that companies are starting to stand behind.