In theory, Reddit should be a marketer’s paradise, but the platform is a notoriously hard sell. If you’re having a tough time marketing on Reddit, you’re not alone.

Don’t give up just yet, though. It could be that you simply need to adjust your approach to reach Reddit’s base of 330 million users [1]. Reddit is a unique place on the web, and reaching your audience there takes some finesse, but it’s certainly possible.

In this article, we’ll introduce Reddit, explain how it works, and cover the pros and cons of marketing on the platform. Then we’ll offer eight tips for making the most of your Reddit marketing. Let’s get started! 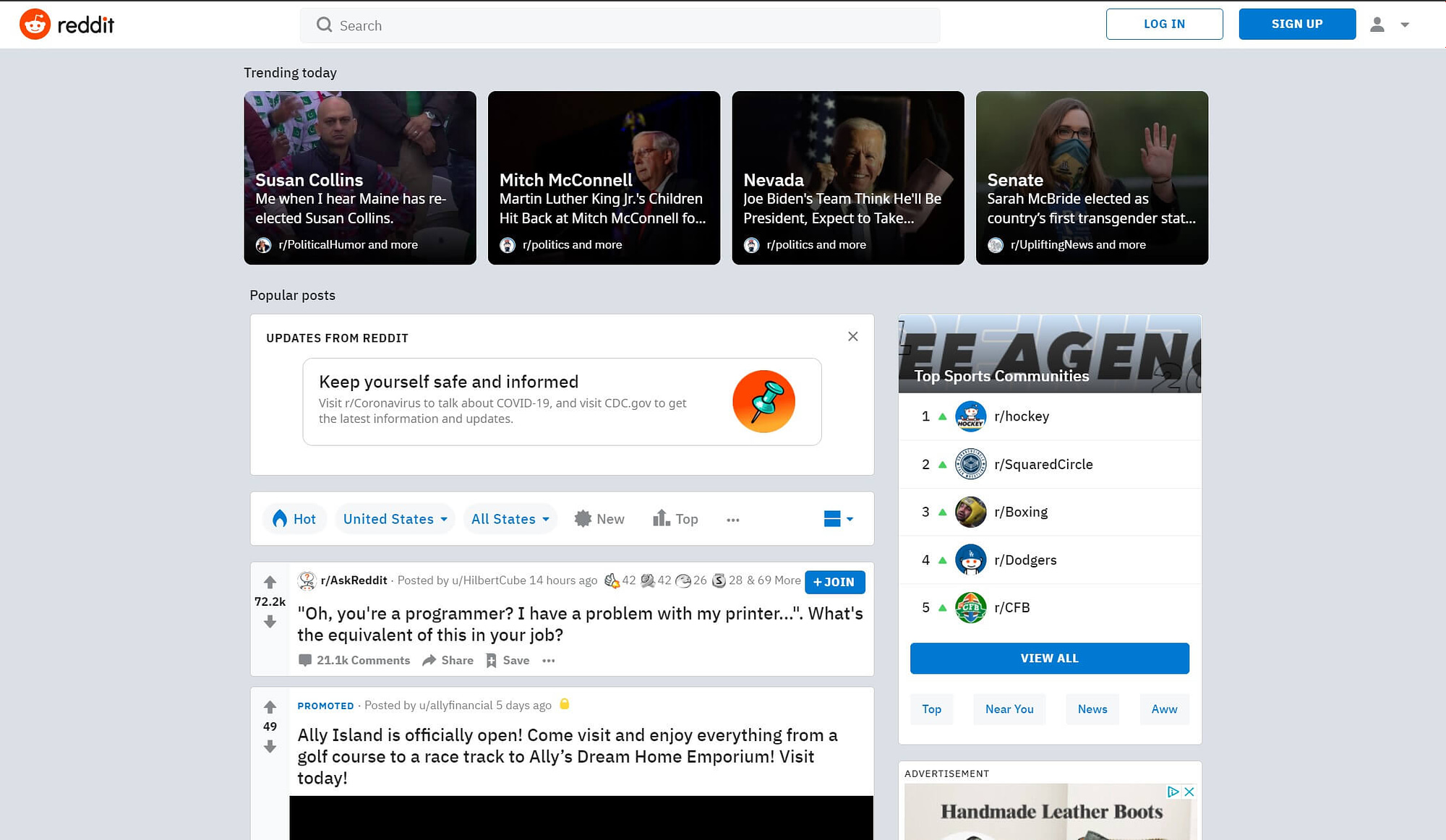 Trying to explain Reddit is a bit of a challenge – the site is fairly unique, and doesn’t neatly fit into one category. Probably the best way to describe it is as a social media network crossed with a news platform and a large forum. Reddit is broken down into smaller sections called ‘Subreddits’ that are each dedicated to myriad specific topics, such as baseball, astrophysics, and even photos of cats standing up: These subreddits can either be browsed individually or aggregated into a feed. Each post in a subreddit can be voted up or down, and the highest-rated posts rise to the top. In theory, this means the home page of Reddit shows the most popular content on the site. Each post also has a comments section, and they have a similar voting system to posts.

In short, Reddit is extremely popular: it ranks as the seventh most popular site in the U.S., according to Alexa. Combine that rank with the huge number of regular users and the highly granular nature of subreddits, and you’ve got a tremendous opportunity for reaching and interacting with your audience.

How can you use #Reddit in your #marketing? Beginner’s guide mastering the platform

Reddit has a bit of a reputation among digital marketers as being a tough platform to crack. Users are, almost as a rule, not interested in direct advertising, and they’re very quick to see through transparent attempts at it. ‘Redditors’ as they’re known, also tend to be fiercely protective of their communities – many subreddits have rules in place to prevent overt advertising, which can make life hard for traditional marketers.

However, Reddit can also be a fantastic platform for building a tribe, fostering brand loyalty, and communicating with your customers. Reddit users, on average, spend 36 minutes per day on the platform’s app, making them some of the most engaged social media users on any platform. Not only that, they rack up over 30 billion monthly page views, according to the site. That’s a lot of chances to build brand awareness.

Marketing on Reddit is a bit different than other social platforms, with lots of nuances and unique pitfalls to avoid. However, there are some things you can do to help boost your chances of success, and we’ll cover some of them in the tips below.

1. Start as an observer

Reddit is a surprisingly complex place. Each subreddit has its own written rules, submission requirements, and a team of moderators. Additionally, there’s usually an unspoken code of conduct in every community, driven by the users, and this code is enforced through the downvote button (and sometimes harsh comments). As such, the best way to get started with Reddit marketing is to spend some time observing and learning the ins-and-outs of the platform.

First, realize that subreddits are Reddit. It’s best to approach it as a hosting platform for the smaller communities. As such, you’ll want to narrow your focus to a handful of subreddits where your audience is most likely to be. For example, if you’re a SaaS company, you might spend your time in productivity, marketing, and small business subreddits. If you sell clothing, you might look to fashion subreddits or those focused on activities your target demographic is interested in.

Once you know where you’ll be spending your time, sit back and watch for a while. Pay attention to the types of posts and comments that get a lot of attention, as well as those considered controversial (you can actually sort by ‘controversial’ when viewing a subreddit). Also, familiarize yourself with the subreddit’s rules.

Once you’ve got a feel for how your subreddits operate and what content is popular, start interacting! Much of the action on Reddit takes place in the comments, so that’s a good place to wade in. Posting too frequently can be seen as spammy, or may even be expressly against the rules, but frequent comments are generally fine, so this is an excellent place to start getting your name out.

Comment on posts that could be considered relevant to your audience. The more frequently you show up, the more people will get to know your username, and over time, they’ll start to recognize you. When you do make comments, look to provide value: answer questions, offer advice relevant to your field, and position yourself as someone who knows what they’re talking about. Avoid deliberately spreading misinformation, and be authentic.

A great example of this method is Ryan Morrison, a video game attorney that goes by the name VideoGameAttorney on Reddit. He’s built a reputation on subreddits focused on video game development by offering helpful advice at no charge to aspiring video game developers. He simply aims to be a regular, positive contributor in these communities – it’s that simple.

Once you’ve got a feel for how subreddits and comments work, it’s time to try your hand at contributing content of your own by posting. This content doesn’t have to be original: you can simply share relevant content in your space to promote discussion. Again, you’re looking to get your name out there and build authority, much like any other form of content marketing.

Much like a blog or other form of content marketing, every post and comment you make on Reddit should provide some sort of value to someone. Whether that’s a good-natured thank you or comment of appreciation to help build up your brand, or a post that informs and answers questions, always make sure your activity contributes to the community.

Something else to keep in mind is that Reddit as a whole generally frowns on posting your own content. In other words, don’t link to your blog, website, or Medium page unless it’s extremely relevant to the discussion. Reddit has a ‘9:1 rule’ in place that recommends you only post your own content once out of every 10 posts you create. It’s also a good idea to avoid submitting the exact same content to multiple subreddits. For more details, Reddit provides a useful article on what constitutes spam on the platform.

While it’s certainly possible to have a post go viral on Reddit, it’s not something you should expect to happen. Your best bet is to treat your Reddit efforts the same as any other content marketing: it can take between six and nine months to start seeing results.

Don’t get discouraged if things start slowly. Continue commenting, posting, and being a useful member of your subreddit. Look for opportunities to sneak in brand mentions or build goodwill. It could pay off big: For example, Findlay Hats brought in $28,000 from a single viral Reddit post. 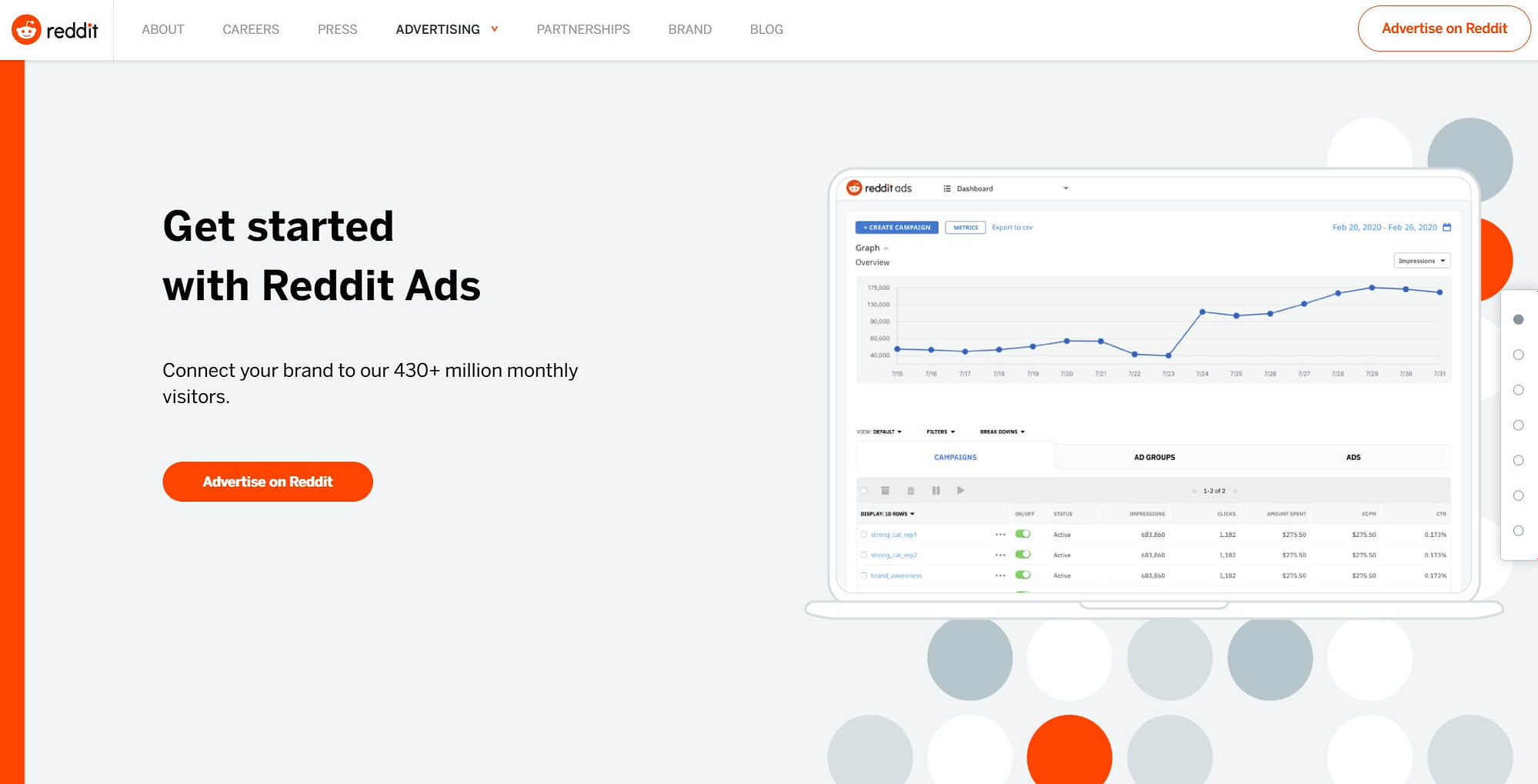 Reddit ads can be targeted by interest or community, with a minimum daily spend of $5. Promoted posts are functionally pretty similar to Facebook ads: they look just like other Reddit posts, with the only major difference being the small “Promoted” text at the top: 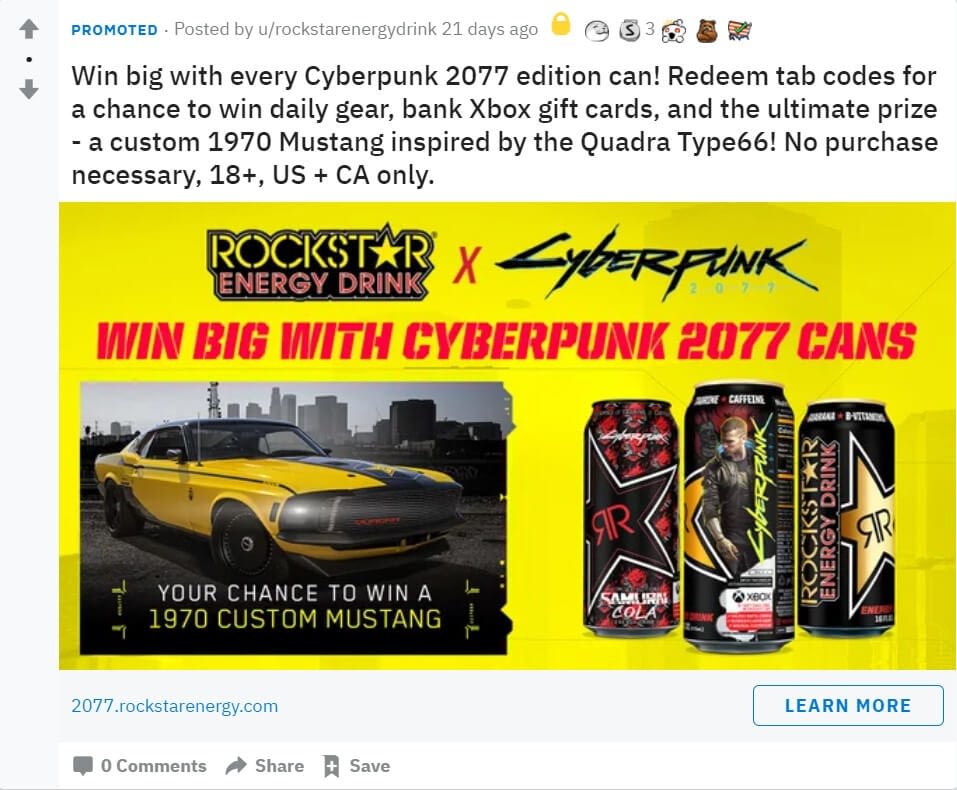 If this sounds like an avenue you’ve like to delve further into, Reddit has a help page with best practices for advertising on the platform to help you get started.

7. Consider creating a subreddit for your brand

If you have a large audience already existing on Reddit and want to attempt to gather them in one place, you can create your own subreddit.

Anyone can create one, and the process is extremely easy. All you have to do is click the Create Community button in the sidebar and fill out the information: 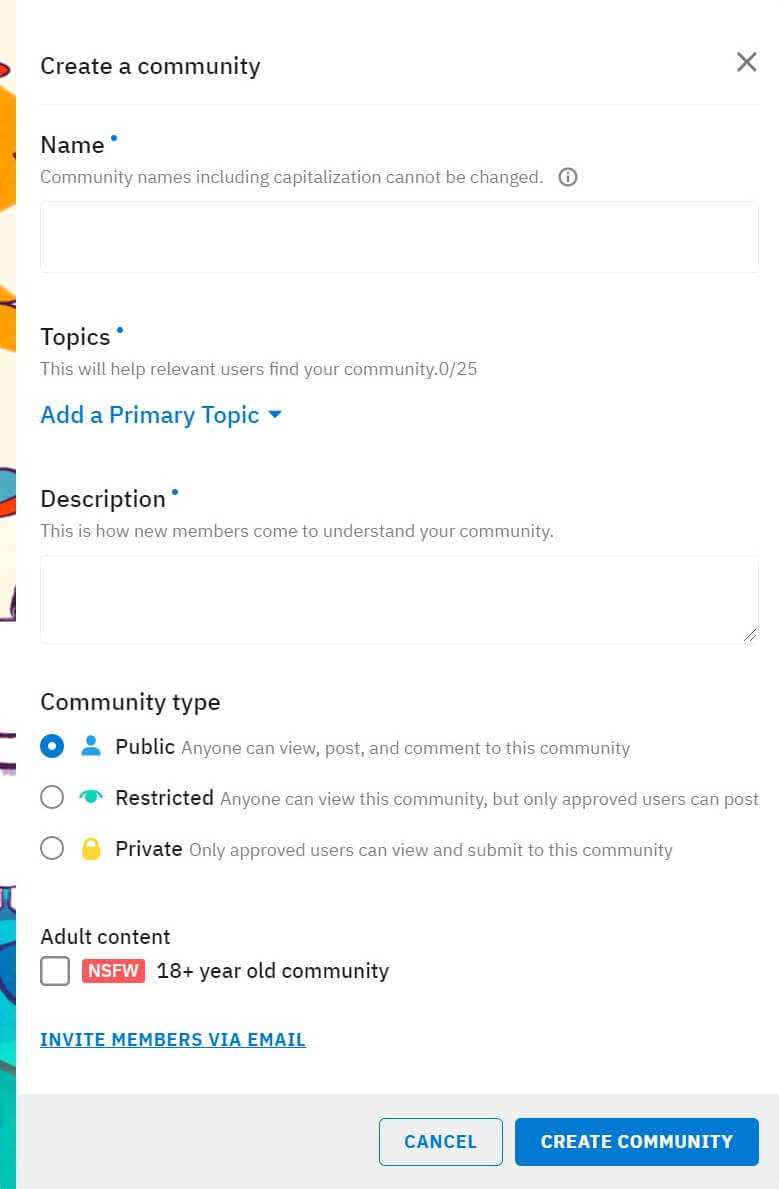 It may take some time to gather a large user base for your sub, but doing so can give your audience a place to discuss your products, offer feedback, and get support (from you and each other). If you’re going to create your own community, just make sure you’re prepared to be involved in it. Users will likely notice if you aren’t.

Finally, consider hosting an Ask Me Anything (AMA) event. This is a post where you invite users to ask you questions about any topic they like, and you answer them. It’s a bit like an online interview of sorts: 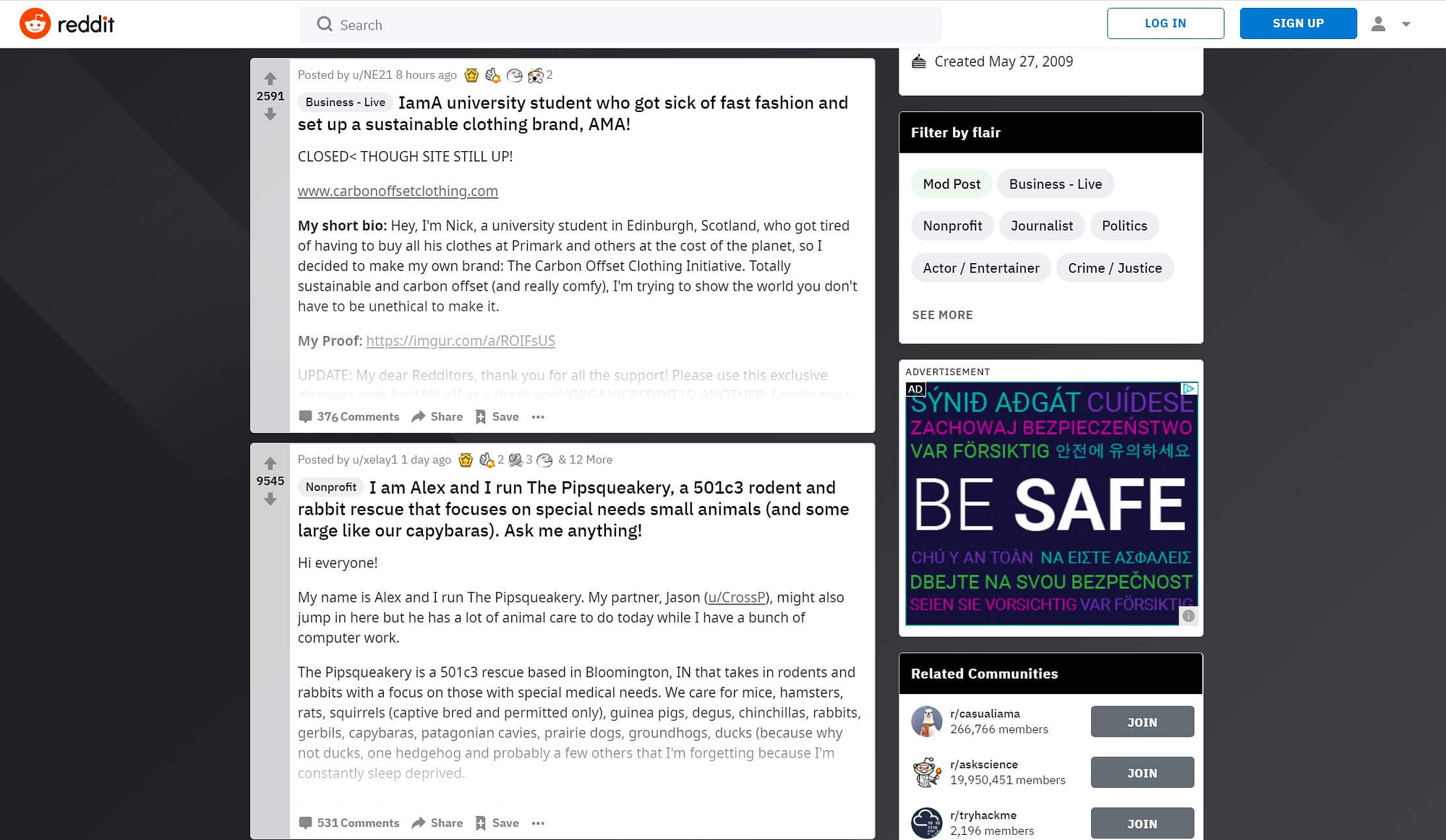 Reddit AMAs can be an excellent way to drum up attention and gain publicity for your brand. Just be careful about how you answer questions, and understand that they can literally be about anything. Don’t make the mistake of trying to keep the topic to a narrow promotional focus or dodge tough questions. Actor Woody Harrelson learned this the hard way: his AMA has gone down in internet history as one of the greatest AMA train wrecks of all time and a fantastic example of what not to do.

With active users in the hundreds of millions, Reddit is a huge community just waiting to be tapped. However, the nature of the platform means that traditional marketing and social media promotion may actually backfire. Instead, you’ll have to take a unique approach.

Whether you’re new to marketing on Reddit, or you’ve been at it for a while and would like to see better results, these eight tips should help you get started:

Start out as an observer to learn the ropes.Join existing discussions before starting your own.Contribute original, high-quality content.Make sure you’re always looking to provide value to users.Be patient and consistent. Success may not come overnight.Promote your posts with Reddit’s paid advertising platform.Create a subreddit for your brand to build a community.Host an AMA to help Redditors get to know your brand better.

Do you have some ideas about marketing your brand on Reddit? Let us know in the comments section below!